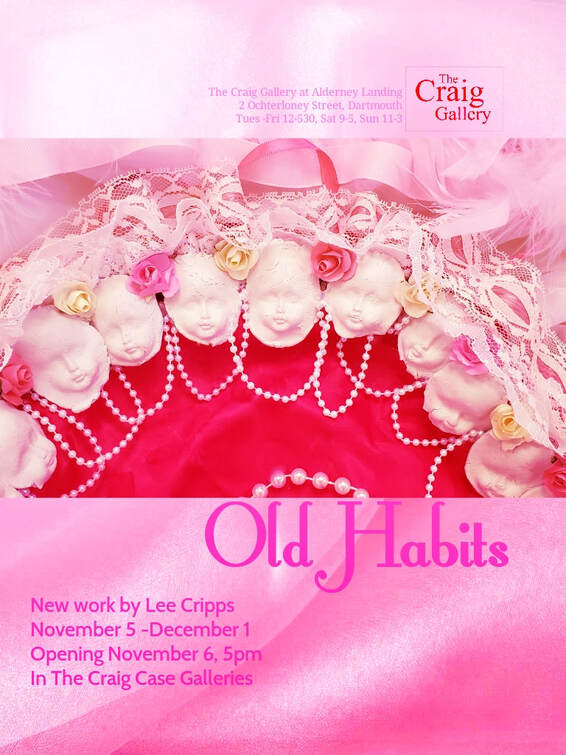 Identity. It’s a fully loaded phrase. It means many things to many people in various contexts.

It’s certainly a phrase with which I’ve sashed  through the depths of my mind throughout my life to date. As a child born as a result of rape, left to be raised by my Great – Grandparents (Mom & Dad), who died far too soon in my life… With half of my birthright unknown, and a hefty serving of incredibly old fashioned values, milk and creamer included, enshrouding my subconscious like the soft pink angora sweater Mom wished I’d wear daily, I often wonder who I am and where I come from. I was stricken with a strong will and a rebellious spirit and come adolescence, began laughing in the face of femininity as we knew it. I embraced a gothic stature and haunted my former life like the Ghost of Lee Cripps Past – and do to this day.

I now continue to wrestle daily – though now not nearly as self-consciously -  with the duality of wanting acceptance, wanting to be everything I should be as a woman – attractive, feminine, soft but fit, slim, agreeable and willing to accept help when carrying a heavy object… I’m now nearing 50 and any slim chance of achieving these goals are quickly sliding out of reach (though really, how close did I ever get). But good. Without fewer challenges of impossible expectations and a phenomenal increase in self acceptance as I concede to growing older, wider, greyer and give up on pleasing any construct other than my own – I build on feeling powerful.

This work is a celebration of a rise in women’s power. A celebration of creating our own standards and values. A celebration of women as creators and for myself, that includes motherhood as well as finding power in what I create as artist. These mandalas are a celebration, an examination, a challenge.  Of birthing There is wisdom in our loins, centuries of stories of birthing and rearing. Of moulding the human race, perhaps a tad melodramatic, but no less true – and no less powerful. 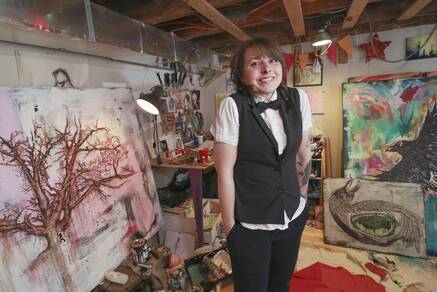 Great feature in The Chronicle Herald released  April 25th about my studio practice
I was told going into the interview that I was the first of a few artists being featured in the article, which for whatever reason, ended up featuring only myself (I don't mind! ;) )
I think the article focused on my studio more as a playground for my imagination, and less on my practice motivations. My main artistic themes being Feminism and Spirituality.
The Studio gives me a space to 'play' within those themes and try things that may or may not end up working within those themes and inspirations. From my perspective and experience, play and trying things out in your studio are the keys to advancing in your practice. It's so important to me, after many years without a proper studio space to have this space dedicated to immersing my self in the practice of art and imagination. ​
​See the video here: https://www.thechronicleherald.ca/living/darmouths-lee-cripps-turns-bones-dolls-paint-and-rusted-metal-into-art-305091/ 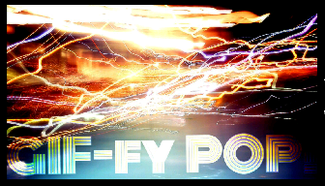 Nocturne 2016 - "GIF-fy POP!"
For this year's Nocturne I produced a series of animated GIFs inspired by Downtown dartmouth lit up at night. it will show at the Dart Gallery on Portland Street and throughout Downtown Dartmouth during Nocturne, Saturday, October 15th, 6pm - midnight.
​http://m.nocturnehalifax.ca/512-gif-fy-pop/ 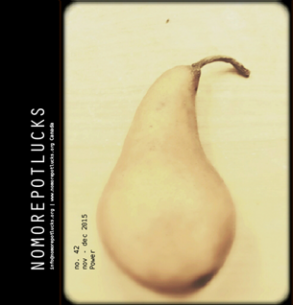 Featured Artist in The Canadian Arts and Culture Publication, No More Potlucks:
​http://nomorepotlucks.org/site/

" Power is such an expansive theme and probably has very different meanings to anyone you might ask. To me, it has everything to do with connection. Being an introvert, I have become very aware of the energy exchanges in everyday relationships, brief or long-term and find power struggles – big and small – in each. I, myself, feel most powerful outside, connecting with the environment. Nature asks for nothing and allows me to gather my thoughts and regroup and explore new thoughts without interruption. It really is like a meditation of the whole being – body, mind and spirit. It’s from this place that I am inspired and powerful within those first fires." 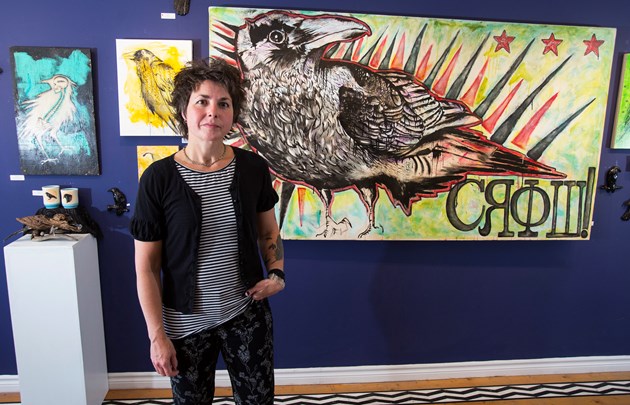 Worth crowing about: Lee Cripps show takes wing at Dartmouth gallery
​Murder at the Dart offers a dazzling array of paintings, drawings and assemblages by the Dartmouth artist and lifelong aficionado of crows.
Jul 24, 2016 11:22 AM by: Liane Heller
​
Lee Cripps stands in front of some of the striking depictions of crows in her show Murder at the Dart, which is on display at the Dartmouth gallery until Aug. 3. (RYAN TAPLIN / Local Xpress)Crows have always been a part of life for Dartmouth artist Lee Cripps.
Raised by her great-grandparents, Cripps recalls a household in which superstition — especially concerning crows — was an everyday reality, from feeding the gregarious, dark-plumed birds, to counting them as a way of predicting events.
"My great-grandmother used to say that one crow was a bad omen," she says, sitting in the Dart Gallery on Portland Street, where her works exploring the nature of crows and ravens will be on display until Aug. 3.
"And then there's a little jingle that says, 'One crow sorrow, two crows joy, three crows girl, four crows boy.' Those superstitions stayed with me all my life, and they're definitely a major inspiration for my work."
As she did while growing up, Cripps feeds the crows that gather near the home she shares with daughter Anna Isabella, 8, and they revel in the birds' social nature.
"They're so special," says the slim, dark-haired artist, her expression full of wonder. "Just as one example, while other birds blend in with their environment, crows are right out there with their almost-black feathers and their attitude — the way they recognize people, for instance."
Cripps, who is co-ordinator for the Craig Gallery and directs the Alderney Landing fine arts program, has been doing studies of crows in her sketchbook for about two years, and she was thrilled when Dart Gallery's Jane MacDougald approached her in March about creating an entire show based on the iconic birds of her childhood.
"The day after we talked, I saw the crows across the street building a nest," she recalls. "I saw that as a really strong symbol."
Cripps' focus in preparing for the show was "the exchange of energy that's always present in nature" and the use of found objects, such as panels and driftwood. "I like the idea of using what we have rather than generating more garbage."
That idea dovetails with the show's themes — magic, mystery, spirituality, environment — while the title, Murder at the Dart, harkens back to the traditional symbolism that Cripps learned while growing up.
Murder is the word that's been used since the 15th century to describe a group of crows, drawing on ancient beliefs that crows signified coming tragedy. And their aggressively raucous voices seem a living testament to the phrase "scream bloody murder."
The artist's crows and ravens often assume totemic proportions, as in Adornment, which offers a dignified, richly feathered bird with head upraised and wide feet firmly planted; the crow's gaze is wise and penetrating. And the subject of Magus, a canvas rendered in luxurious golds and gold-greens, fixes the viewer with an uncannily predictive expression.
Some works lovingly focus on details of plumage, wings and head.
Spirit of the Wind is a powerful portrait in red and orange, with meticulously detailed feathers and the bird's head deeply bent, its beak open as if to grab its prey.
Overheard Over Head takes to the sky with a raven painstakingly portrayed from curved beak to fluted tail-feathers.
Viva offers a remarkably friendly-looking crow with beautifully realized, almost three-dimensional layers of plumage.
Cripps' style combines a representational foundation and an imagination that soars as high as her favourite birds. Straight depictions of crows and ravens take on a surreal quality with the use of colours like lavender, green, red/orange and pink, and some of the works take off into surrealist, symbolist and conceptual territory.
A pink swath of woven material sits at the centre of Peering, and its bird's inner workings reveal a human spine; this technique expands in Inside Out, as a human skull and spine overlay the abstract flash of white feathers above splayed feet.
Equally associative is a series of diorama-like assemblages of found objects: eggs, feathers, stones, bits and pieces of metal, and miniature doll babies, conveying the feel of voodoo iconography. And the feathers that often adorn the dolls like pageant wings suggest the connection between human and natural worlds.
The show also includes a lovely tribute to the late David Bowie. A green and black raven, again executed with Cripps' hallmark care, is surrounded by tiny stars symbolic of the cultural legend's final studio album, Blackstar. The artwork's poetic title is an epitaph in itself: Stars in Your Eyes and Head in the Clouds.
The show's dominant piece, a huge ink-and-acrylic canvas simply titled Crow!, screams in red and black while offering a noble, clear-eyed bird surrounded by dagger-like pickets (a protective enclosure?) and hovering above heavy Cyrillic letters that evoke Soviet-era propaganda. Here, the predicament of nature clearly looms — although its avian avatar is, equally clearly, in ascendancy.
"He's King Crow," Cripps says. "He's being celebrated."
Also celebrating the unique beauty of the crow in Murder at the Dart are the exquisite, gleaming ceramics of Susan Paczek, whose vivid birds look ready to soar into the Dartmouth sky. 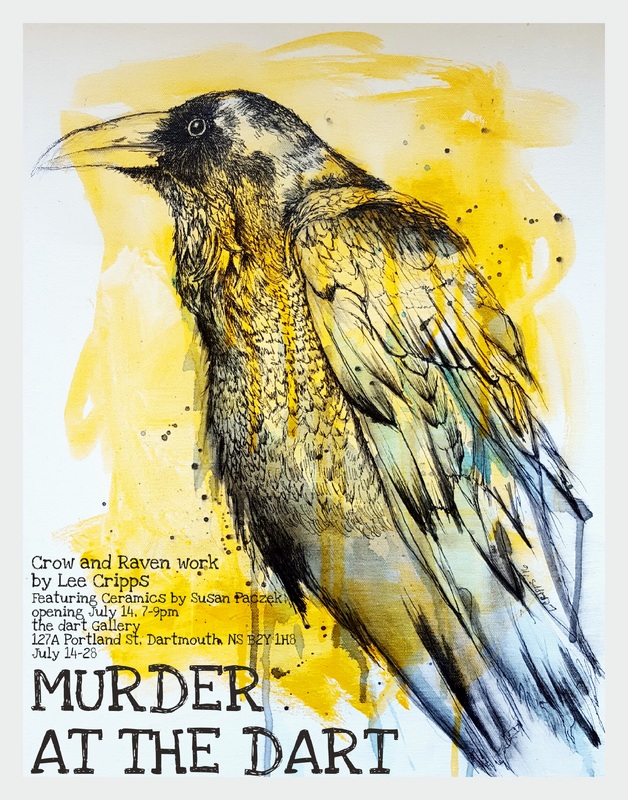 
I've always been intrigued by Crows. I can remember my Mom (technically my Great-Grandmother, who raised me) talking about them a great deal in my childhood. She was an incredibly superstitious woman, and handed down the intrigue of 'magic' to me from an early age.


Crows and Ravens are magical. Their jet black colour, the rustle of their wings on a silent morning, their mystery. They exist on the edge of our reality, skirting dimensions unknown to our lowly perceptions. The crow's wings are singed black from dipping them in the ether of the afterlife.

This body of work explores the subject of Crows as figurative expression – body language and expression, as well as myth, legends politics and the compulsion that grows from superstition and the superstitousness which is fed by compulsion.

As an artist I would categorize myself as an expressionist. Every element plays a part in creating a dialogue with the audience. And a dialogue is created with the canvas as well. By utilizing existing and found materials I am like a crow and the canvas comes with its own character and voice in the conversation. Using existing materials in this way, building on their rich, raw aesthetic value, I am able to add my own vision and expression of not only the crow subject, but a tone, an experience of mysticism, gritty reverence for the supernatural. Using found materials also becomes a comment on the state of our connection to the Earth. We as a Society, Nation, World, do not need to mass produce many things any longer. We have enough. At this point we really need be looking at way to reuse what has already been created.